Hailing from the Vaud region, Géraldine Fasnacht discovered the mountains in her early childhood and soon developed a passionfor snowboarding, practising on the slopes at Verbier. It was not long before her efforts were rewarded, when she won the Xtreme Verbier in 2002 andsaw herself propelled into an extraordinary professional career.

With a thirst for freedom, along with the sense of no limits that snowboarding had to offer, Géraldine spent 12 years in the toughbut exciting competitive arena, including 8 years on the Freeride World Tourcircuit.

But beyond all of this, it was the thought of carving fresh lines and plotting new routes across the mountain that brought her spiritalive. Cutting furrows through the snow, Géraldine began to dream of flying and switching to a different dimension. At the age of 18, she set herself the taskof literally learning to fly. First through parachuting (putting over 300 jumps to her name), and then through free falling and B.A.S.E jumping (parachuting from Buildings, Antennas, Spans or Earth). For Géraldine, this would mean taking off from cliffs in the mountains.

She has also spent time discovering the world, exploring new environments to learn more about other peoples and cultures, as well as travelling to icy climes andtrekking to both, poles.

It was not until 2001 that Géraldine put on her first wingsuit and began to fly. And after 10 years of intensive training and practice, she finally became the “birdwoman”. She has also opened up new flying routes, such as the Cervin summit in June 2014. The aim of this discipline is to stay in the air for aslong as possible and to cover the longest distance. 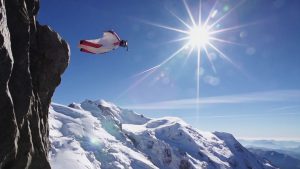 Should there ever come a day when humans learn to fly with their own wings, we will certainly have Géraldine to thank.

Learn from a Snowboarder and Bird Woman

Géraldine is a talented speaker who is eager to share her passion with others.

Yet when she recounts her adventures, she always endeavours to make her audience aware of the importance of risk management, firmly believing that success in extreme sports must never involve taking too many high risks.

Géraldine can hold conferences on personal motivation and fulfilling potential or, quite simply, on her own adventures.

After a year’s rehabilitation, Dr Siegrist allows Géraldine to return to competition inFebruary 2009.